Famously, Google have a system within their company called 20% time which gives their employees space to develop their own ideas and projects, many of which - e.g. Gmail - actually became full-blown services. There have been rumours that this is disappearing, but regardless, it’s a principle that’s been picked up in education and now many teachers give their students free time during the week to allow them to develop their own creative projects. There are even communities on social networks that teachers can join to share their experiences and ideas for how to implement it in the classroom.

But what about us teachers? Wouldn’t we benefit from this too? So often we have great ideas about ways we could improve the school such as creating supplementary materials, running workshops, taking extra courses for professional development….hell, just tidying up our desk and getting our papers in order is enough for some of us, but there never seems to be enough time with all the teaching and preparation we have to do.

Well, at our centre we’ve actually been given the chance to do this. From September they reduced our teaching hours down from 21 to 18 a week. So, ok, technically it’s not 20% time, it’s actually 14% (or 14.2857142857 if you’re a real stickler for mathematical honesty), but it’s better than nothing. This has been called Scholarship Time and we have freedom to focus on ways to develop both ourselves and the centre in whatever way we see fit. By the way, of those 3 hours we have, 1.5 of them are cover, so on some weeks we may not get the full time allotted to us.

For some people it was immediately obvious what they could use the time for: many of the teachers are working on Diplomas, Masters or Doctorates so this gave them a bit more time to work on them. For the rest of us though we needed to be a bit more self-directed to use the time effectively. One thing that helped was that Jo Sutcliffe, our Teacher Development Coordinator, set up a series of informal groups called scholarship circles so that teachers with an interest in a particular area of teaching could meet regularly, share ideas and come up with practical goals and projects for the members to take part in. Topics included: using technology in the classroom, teacher development, try something new, teacher training, assessment, summer school planning, getting published, doing a Masters and doing a Phd.

Some of these took off immediately. Try something new proved very popular as it had a broad, general appeal while teacher development proved really useful for teachers planning to present at conferences as it gave them a receptive audience to practice on. Others such as teacher training and using technology in the classroom took a little longer to get off the ground. A few of them - such as getting published and doing a Phd - never got going at all possibly because there were so specific and only had a few people interested in them.

But they are definitely having an effect. For example, the teacher development circle have been planning workshops and will be running a series of them in March based around a theme. They are also in the initial stages of a longer-term plan to hold a conference at our centre the following year. I run the technology circle and the members have been experimenting with lots of different ideas in class using things such as video cameras, laptops and clickers. And the teacher training circle is giving the CELTA trainers a chance to standardise procedures in a way that they have never done before. And on a less tangible note, I feel that teachers now seem to have more time and are less stressed than they were before. Of course I could be wrong about this….


I appreciate that reducing teachers’ hours is not something that can easily be done, financially it’s just not going to be possible for many schools and centres. But it does help avoid teacher burnout, give teachers a feeling of professional development and will probably help keep better teachers at the school. And those are not bad things to work towards...

Until very recently, there have been very few apps specifically designed to help students studying English for Academic Purposes (EAP). But that seems to be changing - not by a great deal I hasten to add - but you are beginning to see the odd one or two appearing and there are also a few apps that are for general university study skills but could easily be adapted by EAP students. Below, I outline 5 that you might want to recommend to your students:


A real challenge for EAP students is increasing reading speed so they can work through articles at the same speed as native speaker students. Unfortunately, while most native speaker students can read at about 350 words per minute (wpm), most non-native students only manage around 200 wpm, so they need to develop the skills to read quicker. Acceleread is an iphone/ipad app that provides a full course in speed reading, the app is free to download but the free version is more limited and the full version gives you additional features such as the ability to upload your own epub books to read. The ipad version costs £5.49 and the iphone one is £2.99.

I've been using the full version myself to develop my own reading speed and it really does help you through the process with a series of reading tasks and exercises. Below is a short video review I created going over some of the key features:

It's a shame they don't make a version for Android, but there are alternatives on that platform, the best one I've found so far is Speed Reading. Again, it is free to download but to get extra content and exercises you need to upgrade to the premium version which costs a couple of pounds.


As far as I know, this is the only dedicated app available for EAP students. On the plus side, it's free and has plenty of content on many aspects of academic writing, including exercises. It's also cross-platform, so available for both ipad/iphone and Android users. However, the layout and UI are poor, it seems like this is just a series of webpages condensed down for a mobile screen and it shows with a lot of dense text and small buttons to press. If you haven't got great eyesight, this could be a real strain. Still, difficult NOT to recommend it when it's free. Here's a short video highlighting some of its features.


There are hundreds of dictionary/reference apps out there for students, some free, some incredibly expensive and it's difficult to know which ones to recommend to students. I've often recommended the dictionary.com or Free Dictionary apps or  as they are free and can be used offline, but the layout of the entries is a little confusing so it might not be possible for students to easily find the information they need.

Recently though I discovered Terminology 3. The best way to describe it would be as a meta dictionary as it allows you to access a lot of other free online dictionaries (Oxford, Longman, Wordnik etc) through its interface. It isn't free, but it only costs a couple of pounds and the interface is really simple and clean. The video below gives an overview:


Mendeley is a incredible free cloud service for academic students letting them store, highlight and annotate PDF articles on either desktop or mobile. It's also a reference manager so you can easily import/export references into other programmes such as Microsoft Word. The ipad/iphone app is free as well and while it is more limited than the desktop programme, you can read your PDF articles and highlight/annotate them.  This will then sync up with your library so any annotations will carry across to other devices. Students can also organise their articles into suitable folders. Here is a short overview video:

The mobile version is not as slick as it could be, if you want a more refined app to handle your Mendeley articles, Papership is probably a better option, but do note that you can't make notes on articles and sync them up with your Mendeley library unless you pay for an upgrade.

Android doesn't have an official Mendeley app yet, but they can use an alternative called Scholarley. This can download PDFs from your library, but you can't annotate/highlight on them.


This is a really handy little app or desktop tool that allows students to upload Powerpoint slides, images or PDF documents and then record themselves using the device's camera delivering a presentation. For EAP students, this is incredibly useful as it gives them a chance to practice and rehearse giving spoken presentations. Once they've recorded themselves, they can share the recording as a link with their tutor/classmates and there is the option for the viewer to make comments on the recording that are then emailed to the owner. 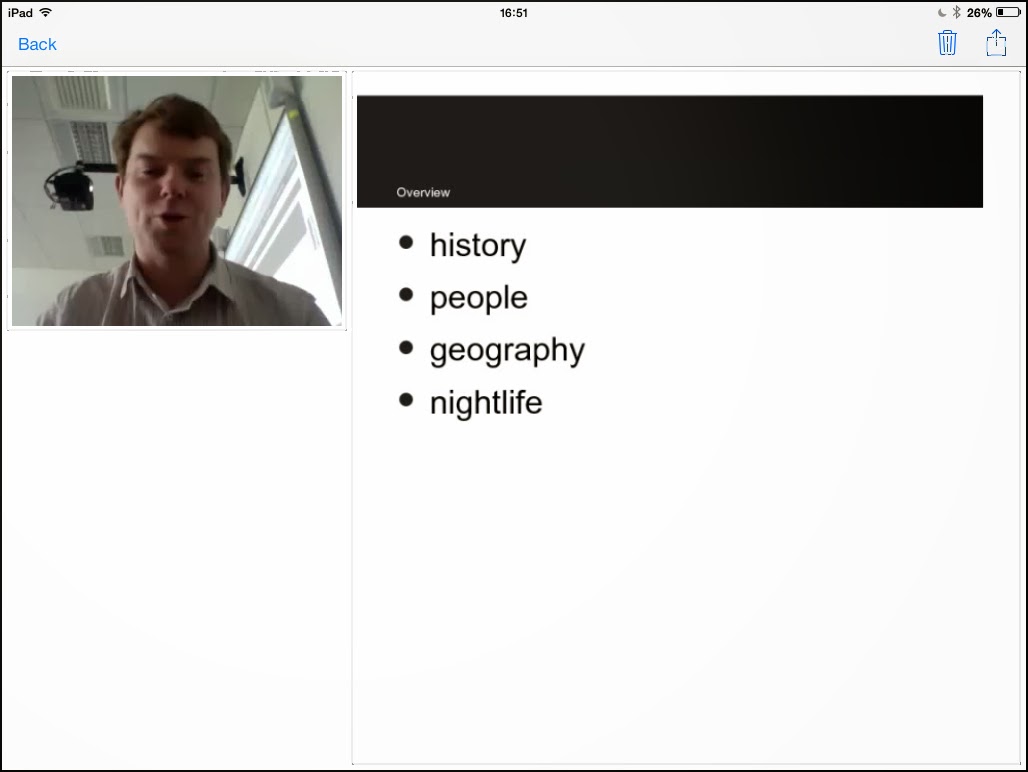 It's easier to record yourself using the desktop app, but it is possible on Android phones and the ipad/iphone. For some reason they seem to prefer pictures rather than powerpoint slides, so students might want to convert slides into jpegs before adding them. Also, you have to pay for the ipad/iphone app (£1.99) but on Android it's free.

Welcome to our new blog

Welcome to the new blog of the English Language Teaching Centre at the University of Sheffield. This will be a place for our teachers to share ideas, plans and thoughts on teaching both academic English and general English to non-native students on pre-sessional courses at a university in the UK. It will also be a chance for us to share about the programmes we run at the centre and innovations we're trying to introduce to improve the students' learning experience.
Posted by Unknown at 06:10 No comments: 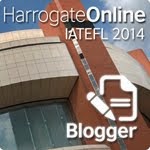